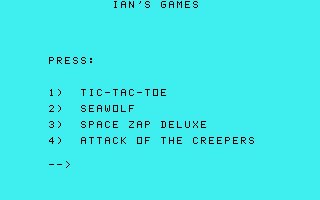 Ian Howle created several games for the TI-99/4A and has agreed to release the games to public domain. Screenshots and descriptions of the games are below, and you can download all five of the disks, including completed games and source code, below.

...well, they're all written in TMS9900 assembly language. I initially tried to write games in basic, but that was way to Sloooow! I then tried XBasic v1.1 and that was much better, but still not fast enough. I then discovered assembly language and learned how to gain instant access to the TI's graphics hardware. I read Bruce Harrison's "Art of Assembly" articles faithfully each month in Micropendium. I then wrote to him directly and asked lots and LOTS of questions. Appearantly, the TI assembly manual had some errors in it (mainly incorrect addresses). Bruce discovered these errors and told me the correct way to do things. Other people in the TI community were also kind enough to give advice and info.

"Attack of the Creepers" was my first major TI project. It took over a year to complete (I was still learning assembly and defining my own programming style at the time). A friend of mine did all the character animation. He originally did TONS of animation frames, but I quickly used up the 48K and had to cut back on the graphics. ;(

Later I created "Tic-Tac-Toe", "SeaWolf", and "Space Zap Deluxe". I was just trying to remake classic games for the TI.

Special thanks to Charles Good converting the disks to image files.

The owner of this site does not guarantee or necessarily test any of the programs or files available for download from the site. Downloading and installing any files is done at your own risk. If assistance is needed, please contact the program author.