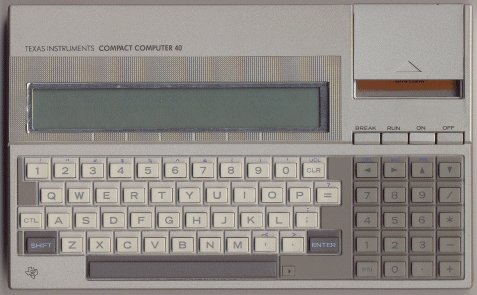 This is the Texas Instruments Compact Computer 40, or CC40. The keyboard is composed of 'chicklet' style keys. In addition to a traditional QWERTY-style keyboard, there is a numeric keypad to the right. Four special keys are located above the keypad: BREAK, RUN, ON, OFF. A recessed reset button is located to the right of the space bar.

The screen is a LCD and is one line by 31 characters long. Display contrast is adjusted by a dial which is located on the left side of the machine. Special characters are also located on the display: SHFT, CTL, FN, DEG, RAD, GRAD, I/O, UCL, ERROR, a low battery indicator, left and right arrows to indicate that text had scrolled off the screen, and six arrow-shaped indicators that can be turned off and on by the user through the use of the 'CALL INDIC' command. Although fairly simple as graphics, custom characters can be defined. Using the 'CALL CHAR' command, the dots in 5-by-8 grids can be specified as being 'on' or 'off'. 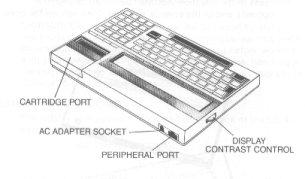 A cartridge port is located on the upper right corner of the machine. Memory could be expanded by installing a cartridge or 'preprogrammed Solid State Software' cartridges could be used. Titles released by Texas Instruments included: Memo Processor, Mathmatics, Games #1, Finance, and Electrical Engineering. 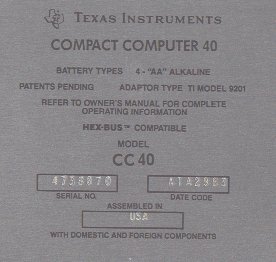 This is the back of my CC40. As you can see, it operates on two 'AA' batteries or an optional AC power adapter. The power adapter (TI model 9201) is plugged into a jack in the rear left corner of the machine. The CC40 has an automatic power down feature which will be activated after approximately ten minutes of no input. Even when turned off, the 'constant memory' feature will retain programs stored in memory.

The CC40 is composed of two double-sided circuit boards connected
to one another by two ribbon cables (yellow- shown below). 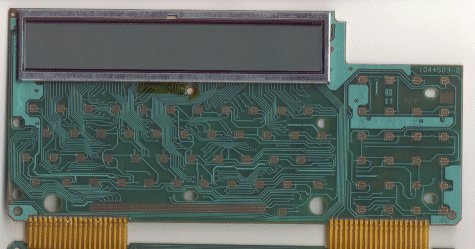 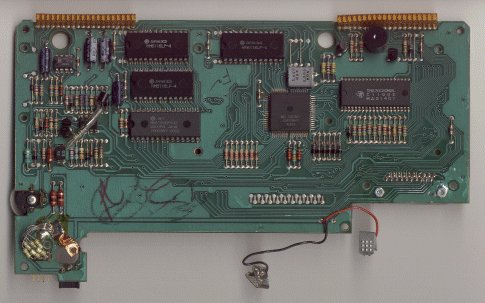 This is the 'bottom' circuit board. The IC's (left to right by column) are as follows:

Photos From The CC40 Box: 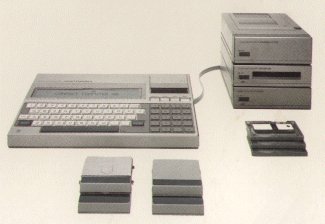 Regarding the RS232, the box reads: "An RS232/Parallel Interface- To Talk With The World. An RS232/Parallel interface allows you to connect the CC-40 with most 80-column printers and X-Y plotters. By adding a telephone coupler (modem), you can communicate with computers and information nets across the world." 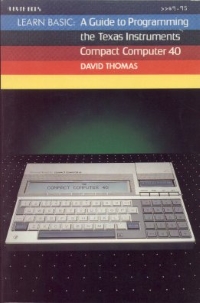 The CC40 comes with a resident 'Enhanced Basic' which is very similar to that ot the TI-99/4A. PEEK and POKE commands were supported in order to read and write to memory locations.

Composed of 28 'lessons' it apparently assumes no previous knowledge of BASIC programming and begins with variables and moves through to string manipulations and logical operations.

- Download this book from the file database: Guide To Programming The CC40 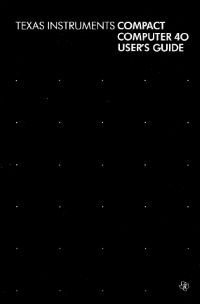 The CC40 was shipped with a user's guide that lists the lists the CC40 specs, and explains how to program it.

- Download this book from the file database: CC40 User's Guide

Own a CC40!  Mike Dudeck sells CC40 computers and equipment, and has sent me a new price list.  You can take a look at his inventory by visiting www.texintreasures.com or you can contact Mike at [email protected]


David Vohs found information on The Museum of Dead, Gone and Obsolete Computers web site which states that the Excelvision EXL 100 was created by people who had worked at Texas Instruments. Apparently, the EXL 100 was only available in Europe and used the same CPU and BASIC as the CC40. Check the CC40 and EXL sections on the Museum's web site for more complete information.

You can type these Basic programs into your CC40:

Something to contribute? Questions? Comments? Corrections? E-mail me at [email protected]

Items on this non-commercial site are presented for reference/nostalgia purposes only.