Many thanks to Bryan Roppolo for providing both the photo and information.

The TI-99/4 was Texas Instrument's first attempt into the home computer market. This computer was originaly equipped with a Zenith monitor and sold for a little over $1000 which was pretty expensive for a computer in 1979.

The TI-99/4 had an entirly different keyboard than the 99/4A. There were a total of 41 keys which includes the orange Shift and Enter keys and there was even an extra Space key next to the "A". Now get this, above the number 6 on the 99/4, there is a comma character, but on a 99/4A and modern computers there is a carrot. However, the 99/4's keys were not the normal "typewriter"-like keys found on the 99/4A, they are almost identical to the modern TI calculators. The first time I used a TI-92 I noticed how similar the keys were in shape compared to the 99/4 and they even had the little dips in the center.

The problem with the TI-99/4 is that there was no Function key to access the Redo command, Reset command, etc. Instead, the 99/4 used the Shift key to access these special functions. For example, you would hit "Shift-C" to break out of a program or "Shift-Q" to restart the computer. I can remember one time that I accedently hit "Shift-Q" in a BASIC program I was writing thinking that it would capitalize the letter "Q" but instead it restarted the computer making me very angry since I would normaly type for 2 hours a day and all that work would be gone! But now I am very careful, I always save my work after typing in 100 lines just so it dosen't happen again. Maybe the TI-99/4 taught me a lesson on saving work that I might not have learned to this day if it wasn't for that machine.

If you are wondering how I memorized that "Shift-Q" means to restart the computer or "Shift-C" breaks a program, it is not by the mistakes I made (May have helped) but by the black thin sheets that would cover the entire keyboard and let you know the special functions. There were also game overlays that would tell you which keys to push to move a character around or if you are player 1 or 2.

The 99/4 yet had another draw back. It could ONLY write in UPPER case letters! But when the 99/4A came out, TI expanded the ASCII character set to include UPPER and lower case letters along with the { } ~ and ^ characters. There was a little program that I made on the 99/4A in BASIC that went like this:

As we know, the 99/4A only has 2 options with a cartridge plugged in. But on a 99/4, there are 3 options, this is because there was an Equation Calculator built into the 99/4 that could do all of your calculating needs. In this program, not only could you do calculations, but by pressing "Shift-E" you could store a number or problem in memory for later use. The Equation Calculator might be the reason why the TI-99/4's ROM is 5 kbytes larger than a 99/4A.

Now the most important difference. The TI-99/4 had the same CPU as the 99/4A(TMS9900 while running at 3.3MHz) but they had different graphic chips. The 99/4 used the TMS9918 graphics chip and the 99/4A used the TMS9918A (This might be the reason they called it the 99/4A). You might think that by using a 99/4A you could get better graphic capabilities in BASIC. But that is not neccassarly true since you could not use the additional display mode (A) in BASIC. I have continously tryed to get Parsec working on my 99/4 (works on my 99/4A) but have had no luck. The reason for this might be that Parsec took advantage of the TMS9918A capabilities making it not playable on a TMS9918 machine.

When the TI-99/4 came out, it was supplied with an 1/8" mono earphone jack which could be found on the bottom left side of the console. When you plug in any type of earphones you can get the sound directly from the machine instead of from speakers (The earphone jack also appeared on the Apple II computers). But you should always be careful, once I plugged in my earphones and the computer gave off an ear-piercing sound when I turned it on that rattled my head for a day. There might even be another version of the 99/4 where there is a speaker built into the case under the cartridge port!

The 99/4 uses a different power supply than a 99/4A. Usually, the /4 power supply has a large silver TI logo stamped on the top (not engraved like on a /4A). If you look on the bottom of the power supply, it should say this:

I am telling you the differences because if you use a 99/4 power supply on a /4A, you might damage the machine.

You may think that the cartridge ports are the same on both machines, well that isn't true. The 99/4's cartridge port is 1/4 inch closer to the opening than on a /4A. This really shouldn't matter unless you have a cartridge titled "Preschool Early Learning Fun" (which is totaly different than Early Learning Fun) that was made specifically for the 99/4 and if inserted into a 99/4A it will not make contact, therefore you will not be able to play the game!

Other facts from a 1979 issue of Mechanix Illustrated Magazine:

Thanks to Jim Fetzner about the cartridge port.
-Bryan Roppolo 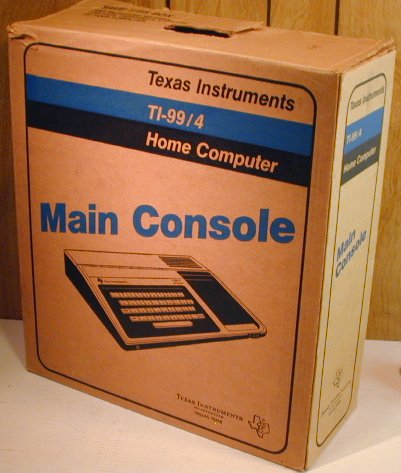 A big 'thank you' to Brad Rosenberg for these photos of his 99/4 system!

Download a scan of a TI-99/4 brochure from TI. The file is a zipped MAX format. Links to download a free MAX file format viewer can be found here.

If you would like to provide information or photos for this page, e-mail me at webmaster@99er.net
Home | Site Map | Search | Contact/E-mail | Link To The HCP | FAQ | Newsletter | FREE 99er Email | Privacy